As a new kid on the block The Great Estate Festival had a lot to prove, they already set their ambitions high by making the event three days with camping. I can say with complete confidence that The Great Estate may go down as one of my favourite festivals for a variety of reasons. The general atmosphere was one of an extremely peaceful nature, yet there was still plenty for those wanting to get their groove on.

The Great Estate Festival Promised “The most rambunctious garden fête” and they weren’t kidding, across the three days we saw flamingos, Camel Racing and a wide variety of bands and artists.

We had such a fun filled time that the only fair way to review it is to do so day by day. We hope those of you that came to The Great Estate Festival had as good a time as we did and for those of you that didn’t be sure to book your tickets for 2018!

The day had finally come that I had been waiting all week for and I was ready to take on The Great Estate. The cameras were packed, notepads were at the ready and most importantly, beers were in the cooler. Upon arrival we were greeted with big smiles from the event crew and guided through the parking with ease, myself and Bobby (Clunk Team Member) gathered all our belongings from the car and headed to the campsite.

One thing stood out as we erected our ballsack textured teepee and that was the level of high end tents surrounding us. a dawning feeling of unpreparedness came over us. However, I became incredibly proud of our tent that shared familiarities with a scrotal sack.

Naturally, after setting up our tent we decided it was time to crack open a tin and get the muscles loose for the festivities that lay in front of us. To enter the actual festival you had to wander through an overgrown estate garden that was decorated splendidly with bunting, fairy lights and disco balls. This path would be one that lead to great amounts of joy.

Our first taste of music was at the secret BBC Introducing tent, we arrived as David White was announcing that they were live recording the following session with the Dodge Brothers a blues/American country collective. Although the music wasn’t of my own personal taste, the band put on a great show and it was nice to be a part of something so exclusive.

The first day of festivals are a weird one, you spend a lot of time popping your head into tents and freaky crevices trying to figure out what the hell you are going to do, as well as where everything is. Once we had settled and sank a few strawberry ciders in the sun, we headed to the main tent, where we watched The Electric Swing Circus explode with their modified barrage of swing music with modern upbeat twist. Their performance was truely electric and as you can imagine they had the whole tent bouncing.

By this point those wandering around had been successfully lured towards the main tent and the buzz around the next act was vibrating through the air. After a quick stage reshuffle, headline act Dr Meaker burst on raring and ready to go, leaking energy before even playing music. Once introductions were over Dr Meaker blew The Great Estate main tent off with their fiery live drum and bass performance. It was a mesmerising show that boasted their ability to create such energy live.

As we were technically working at this festival we tried to keep things mellow and not drink too much but after that set we were fired up. We immediately headed over to the festival’s third stage ‘The Portal’ where we were tickled by the heady mix of dance music that had us grooving into the early hours.

As we stumbled back to our tent we couldn’t help but be absolutely smitten with what we had experienced already, it was clear from this point that this weekend was going to be amazing.

I was woken on Saturday by a single drop of water landing on my forehead, as I rubbed the sleep from my eyes I noticed a hole in the tent where the dew from the morning had seeped in. At first this was of great annoyance to me but it forced me outside to witness a stunning orange glow of sunrise. As I stood there in nothing but my pants watching the golden sun rear its head around the tree line I couldn’t help think to myself “Why the fuck am I awake?”

After relocating my bed so that I would stay dry, I headed back to sleep to make sure I was fresh for the festivities ahead. Once we had achieved the number of z’s we required we wandered into the festival space eager for a cup of tea and a bacon & egg roll. We stumbled across what can only be described as a mobile greasy spoon and they provided us with what we need and more! Once I wiped the brown sauce from my chin and egg off my lips we headed to Madam Wongs to watch local sensation and viral hit Daisy Clark. 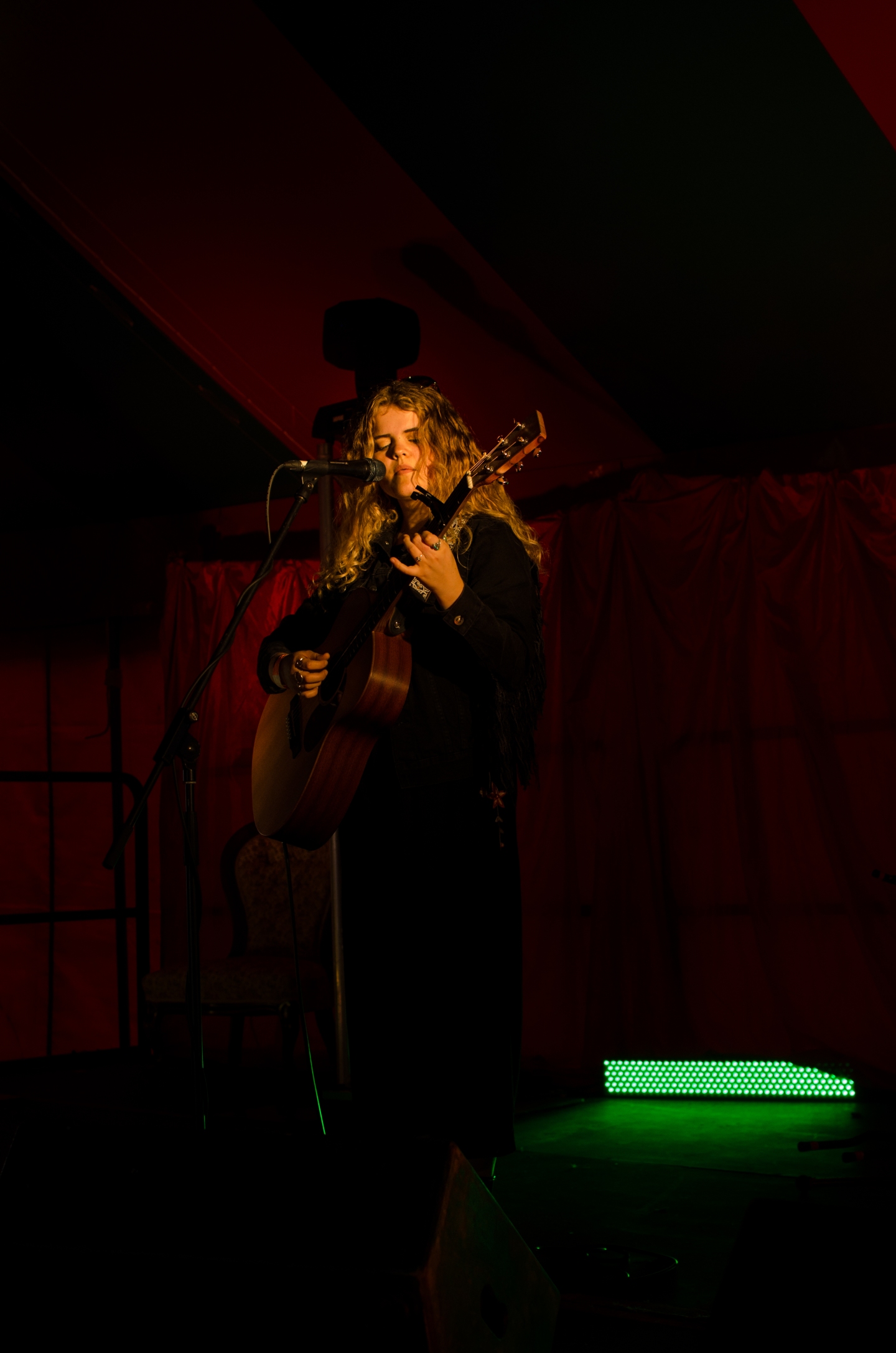 Over the past couple of years Daisy has become somewhat of a sensation online and locally and after watching her set at The Great Estate it is clear why. Her vocals are incredibly impressive and powerful, not to mention her genuine aura that she carries on and off the stage.

In Between hopping from tent to tent and backstage we took in the sights around us and the people that attended this festival. One thing that was clear from the general attitude and atmosphere was that this festival was family orientated though it still catered for the needs of every age group. It really was a delightful event and the fact the sun had shown it’s face really aided in making Saturday pretty damn epic.

Saturday was a busy day for us and we had a lot on our schedule but this didn’t stop us from catching some fantastic acts. Once we found a quite moment we headed back to the main stage to get a fix of live music, getting ready to play was Loose Salute and to be completely honest we weren’t sure what to expect from them. However, their guitarist was wearing a cape and looked like a skinny young Lemmy so naturally we were intrigued.

Loose Salute certainly didn’t let us down with their romance tinged rock n roll that striked similar to the likes of Fleetwood Mac. They bought something to the Great Estate and that was a real rock ‘n’ roll experience, a throwback to the 60’s and 70’s era of music.

The following band the Sundowners brought a similar sound but with a healthy injection of psychedlia. The thumping raw psych-beats mixed with the flurry of guitars and angelic vocals made them a real far out experiance.

The next and final act of the night at the main stage and arguably the moment people were waiting for was Echo and the Bunnymen. Ironically, for me, they were the first let down and disappointment of the whole festival and remained so until the end. I found their stage presence boring, the lead singer’s attitude disgraceful and their set lackluster. As a headline act they served their purpose, they are a big name and have some hits but watching a band with the lights off them, posing as shadows and not interacting with the audience was insulting for those who had paid to come see them play.

Sunday morning was one of the bleakest mornings of my life, I woke up with a soggy bum thanks to the leak in the tent and the rain that fell in the night. All was well though as within the hour the sun came out and as per our morning routine we headed to the greasy spoon to have a much needed cup of tea and a greasy bun filled with bacon and eggs.

The final day was a more relaxing experiance and this was felt throughout the festival, most of the crowd spent the day sat around basking in the sun and sipping fruity ciders. However, come evening the festival came back to life probably due to the alcohol setting in. We were lured to Madam Wong’s House Of Wrong  by an explosive garage rock sound that turned out to be Waxx. Unfortunately we only caught the end of their set but what we heard was a delightful barrage of hard riffs and thumping percussion. 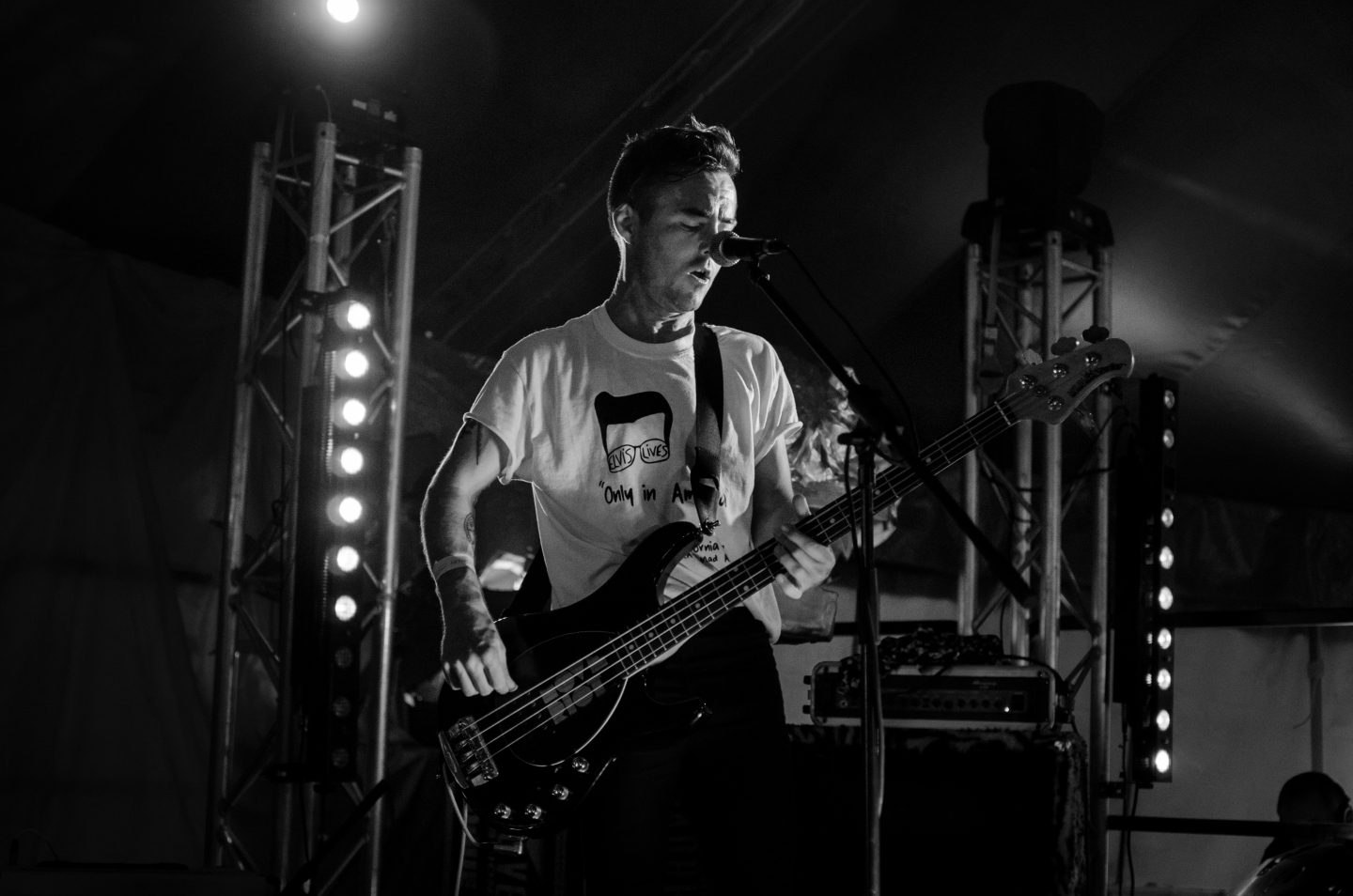 The following act was an artist that I have waited many years to watch perform live, ever since I saw his ‘Chap-Hop History’ video on YouTube. I am of course talking about Mr. B The Gentleman Rhymer, the Chap-Hop extraordinaire. His performance was one of pure hilarity that had everyone of all ages in hysterics, he was a pure delight and put on a spiffing show.

After the guffaws we were seeking to get our bodies grooving, luckily the main tent had just what we needed. For the rest of the festival funk and soul took over the main tent starting with Friday Funk Social Club who got the crowd warmed up for the funk barrage that was about to follow.

The next artist was Uncle Frank who may go down as one of our favorite discoveries from the festival, the electric performance mixed with the charismatic frontman made them a real treat. Their most stand out song being ‘Poonani’ a delightful soul number about the magic of vaginas.

We were buzzing off the performances of Uncle Frank and Smooth and Turrell (we missed a chunk of this set as we were interviewing Craig Charles) but what we caught was amazing. I had heard rumours of what a great DJ and performer Craig Charles is but was absolutely floored by his set, it was an absolute spectacle. I have never seen a DJ look more comfortable, happy and in his pure element as much as Craig was that night. It was a true marvel to watch, not to mention the level of funk he provided was of a near dangerous level. My legs are still aching from the dancing.

Overall, The Great Estate Festival provided a place for people of all ages and sub-cultures to enjoy themselves and basque in some weird and wonderful goings on, as well as to watch some top quality musicians and artists. Across the weekend we saw families, couples and groups come together to experience the festival together, there was something for everyone. The festival itself was extremely organised with only one minor fuck up on the morning of the Saturday but it was resolved in quick time (the generator blew). The staff and security were incredibly friendly and helpful, all of whom were constantly smiling and interacting with the revellers.

There are few festivals where you can watch a 50 year old dad dance to drum and bass in his flip flops next to a group of teenagers with complete confidence and lack of judgment from both parties. This attitude was felt in every corner of the festival and it was a real pleasure to be a part of it.