Opening youngsters; RAIN did look a little bit like the cast of This Is England ‘88 (which is not necessarily a bad thing) their bowl cuts, adidas jackets and polo shirts were a visual representation of the nostalgia audible in the band’s’ music – very reminiscent of a late 80s/early 90s britpop group. The boys definitely lacked some basic performance skills; the band’s movement consisted entirely of a side-to-side swaying motion; other than which the band was rather static.

They made up for it somewhat with a really surprising use of cool guitar tech – lead guitarist made use of a E-Bow and an array of digital delay pedals – seeming to be the heart of the ambient layers created by their 3 guitarists.

I think with some crafting of their stage skills and a more natural communication with the audience and this band could be onto bigger things.

Knowing that Cosmo Pyke were main support for the entirety of JAWS UK tour, I had high hopes but ultimately no idea what to expect.

Being completely honest, I expected a group similar to RAIN in their use of reverby guitars and vintage britpop attire. I did not expect a singer songwriter by any means but I was pleasantly surprised.

From the moment he stood on stage; Cosmo Pyke oozed confidence, charisma and charm. The first note of his first song demonstrated his incredibly slick aura and beautifully smooth voice. The audience picked up on this straight away with screams of “I LOVE YOU” coming bashfully from the crowd. I instantly noticed the similarity between Cosmo Pyke and King Krule. Not just in songwriting style but even down to articulation, lyrics and vocal phrasing. The resemblance between the two artists was uncanny; there’s no way they could be so similar without Pyke being a huge fan and/or studying King Krule’s entire discography. He did prove, however, that he wasn’t just a copycat by his totally random, yet fitting use of rapped verses somewhat comparable with a London Grime MC.

Cosmo Pyke was joined onstage by perhaps one of the tightest and most versatile live drummers I’ve ever seen. The guy had bags of groove and made use of some really tasteful fills as well. He proved his versatility and use of dynamics even in the quietest of songs. Whether or not he was just a session player or a lifelong friend; the chemistry between the two guys on stage was amazing to watch and hear.

Finding Cosmo Pyke for me, was arguably more important than seeing JAWS live. Some of the most captivating and stylistically versatile pieces of songwriting I’ve witnessed in a long time; this accompanied by an amazing voice and a crazy tight drummer makes Cosmo Pyke one to watch for certain.

Despite a surprisingly young audience, the crowd for JAWS was absolutely heaving with people in their best glittery crop tops and pristine adidas trainers.

The band kicked things off with the first single from Simplicity ‘Just a Boy’ which was met with a roar from the crowd and everyone in the first first rows singing along to all the words. It hit me at this point how incredibly popular JAWS really are; with a tour that sold out half of its dates, regular festival appearances and backing from Radio 1; they’re on their way to becoming one of the most popular UK groups of the next few years. They can pack any good sized venue and still have the crowd sing all their songs. 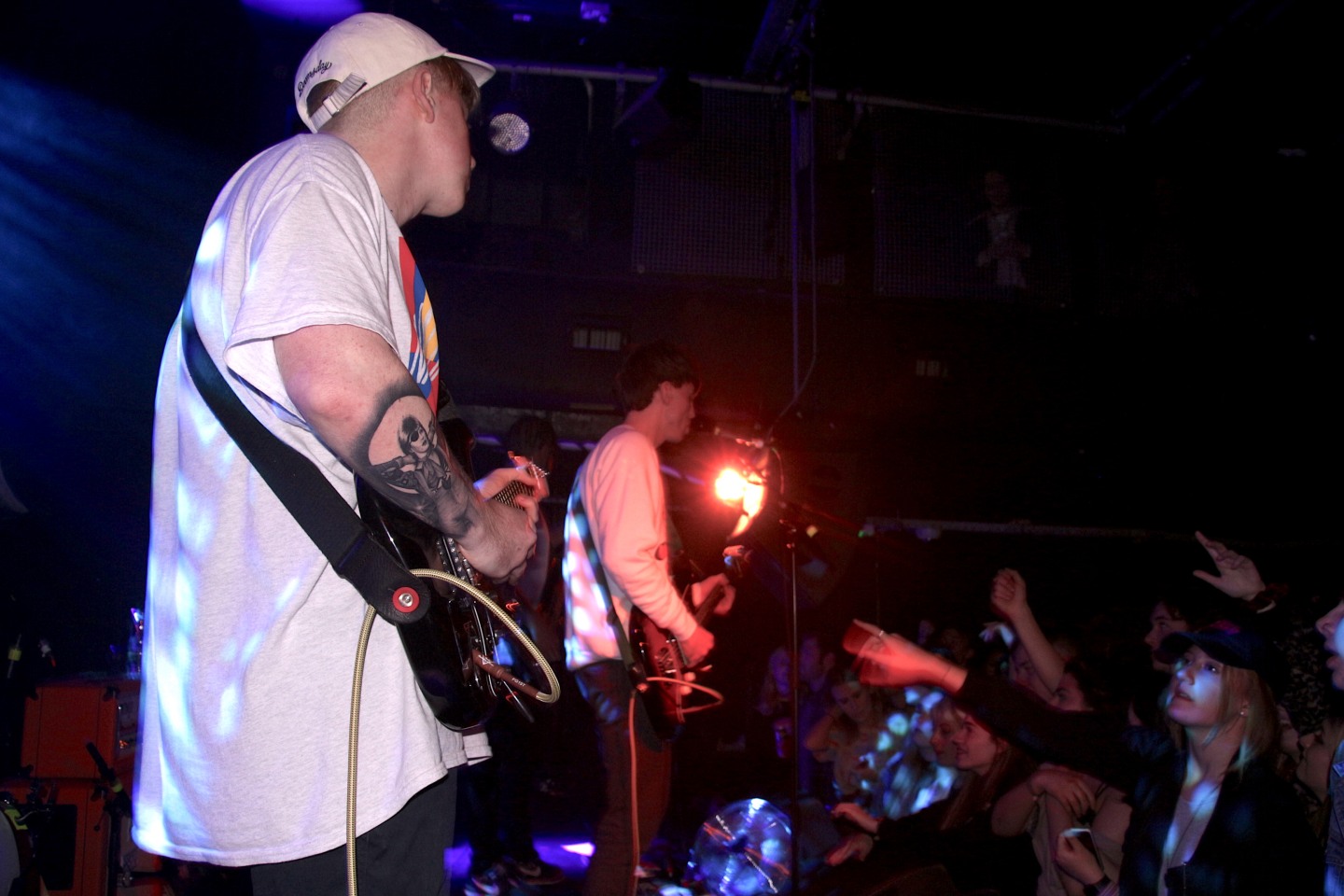 The sound was fantastic from the get-go, guitar tones were superbly crisp, bass was punchy but not overpowering;the FOH mix in general was absolutely perfect. The entire first half of the boys’ set sounded exactly like on record. JAWS must be touring with their own FOH engineer, as the sound was too good to be spontaneously produced by an in-house member.

One thing that particularly caught my attention was how tech savvy these boys were; on record, the use of effects and samples and production trickery is evident, but I never imagined them to be the type of band to bring it all to the stage; Frontman Connor Schofield was sporting a rather large pedalboard featuring boutique pedals from the likes of Strymon and more. These seemed to be the heart of JAWS’ signature ambient and reverby layers – accompanied by drummer Eddy Geach’s use of samples and drum triggers – the band melded electronic elements with real time instrumentals seamlessly; proving that there is certainly a lot going on behind the scenes. On the subject of drummer Eddy Geach; his chops as a live drummer took me by total surprise. He really brought the energy to the stage and made use of some very creative fills that you just wouldn’t expect in an Indie Pop band; but it totally worked. Geach made lots of use of ad lib as well, but most importantly, the guy never missed a beat. 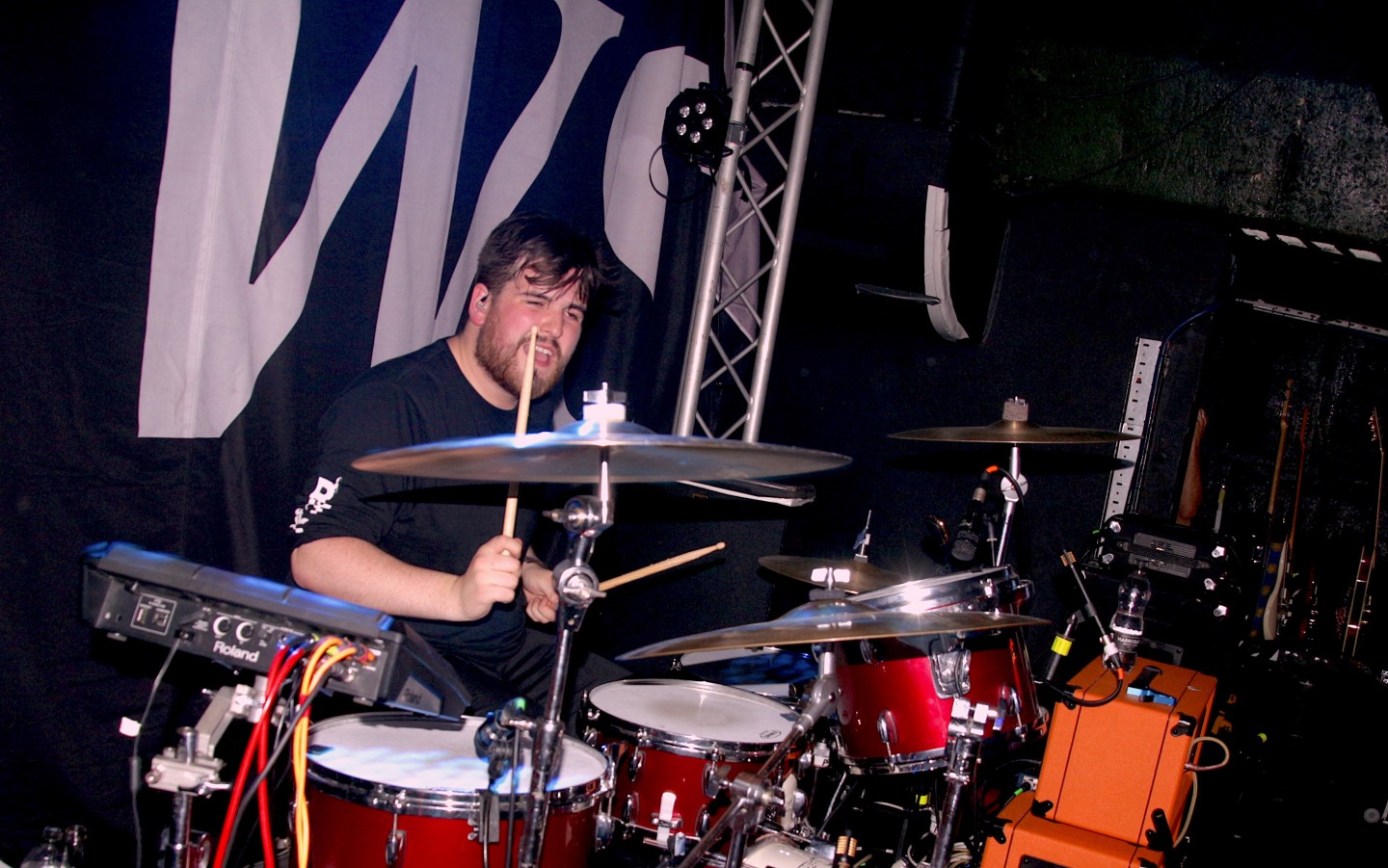 One genuinely disappointing aspect of JAWS’ show was frontman Connor Schofield’s complete lack of genuine enthusiasm and energy. For a band that have been touring for 4 years; you’d think the Birmingham boys would’ve gotten used to a room full of eager fans. Although he kept a level head, it was clear Schofield had a real problem connecting with the audience – often looking away, or closing his eyes so avoid eye contact. On one occasion when tuning between songs he stared out into the crowd for a good 30 seconds or so before nervously saying “I don’t really know what to say…” which is a real rookie mistake for a frontman to come out with. What made this worse was that only a few songs later, Schofield tries to come up with a witty comment but instead comes out with “Wow, like, I literally don’t know what to say”. Which to say the least, was really discouraging and substandard response to give to a room full of some 500 crazy JAWS fans. Not a good look at all.

Vocally, however, Schofield’s performance wa near perfect – he showed of his rich and warm tones, sounding just like they do on record, and despite the awkward stage fright, his energy picked up towards the end of the set as the band closed with a blistering and passionate performance that the crowd absolutely loved.

I can give JAWS the benefit of the doubt regarding their slightly juvenile nervousness whilst performing on stage as it was the first date of their biggest UK headline tour to date. JAWS are well on their way to being a national pop treasure, along with the likes of 1975 and Foals – I wouldn’t be surprised if I saw them headlining Glastonbury in two years time.

Gigs in the southwest!