Haggard Cat are a special kind of badass. Born out of the ashes of the astonishing Heck (previously Baby Godzilla) Haggard Cat brought their rollicking brand of rock’n’roll to Hackney’s Sebright Arms. Loaded with riffs and the kind of whiskey-swilling, hip-shooting that wouldn’t seem out of place in a roided-up Sam Peckinpah Western. 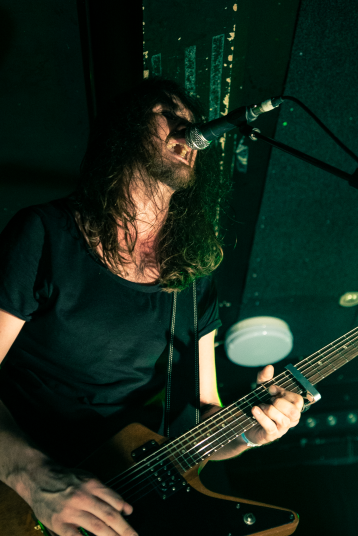 If you were ever fortunate enough to catch any of their previous incarnations live (Heck being on of the greatest live acts to hail from our shores) you’d be fair to expect a great deal from Haggard Cat. With half the manpower they had to double their attack and they were pulling no punches.

With Matt Reynolds peeling out wild licks and Tom Marsh’s percussive onslaught on the drums it’s rare to see a two-piece that can whip up this much of a racket. It genuinely beguiles me that a band as pedestrian and dull as the likes of superficially similar Royal Blood will be topping the charts while a band this sodding good are playing basement shows. But if there’s any justice in the world this will be short lived as the songwriting of Haggard Cat has surpassed that of any of the member’s previous bands.

If you like your rock music with saloon-swinging swagger and raucous punk spirit then seek out Haggard Cat. Off the back of their signing to Earache Records and the rad debut, ‘Challenger’ these guys are ones to have pegged for the big league.